Eli Yones: Achievements in 2008 and continued growth in retail banking provide appropriate infrastructure for facing next year's challenges
"Alongside the implications of the global financial-economic crisis and deterioration in the state of the economy, which are primarily reflected by the provision for doubtful debts and by investment in securities, Mizrahi-Tefahot continues to show positive development in on-going business operations and profitability.
Financing profit grew in 2008 by 13% - mostly from the retail segment. In the mortgage segment, the bank increased its market share to 34% on annual average. Trading rooms recorded in 2008 growth of dozens of percent in operations and income, and business credit recorded growth in excess of 11%.
Along with continued improvement on the income side, we managed to satisfactorily control expense items. Last year, growth of operating and other expenses for the Group (excluding impact of initial consolidation of Bank Yahav financial statements) was 3.0%, with payroll growing even more moderately at 1.9%. The merger of Bank Adanim into the bank would also help achieve significant cost savings at headquarter level, while preserving the points of sale.
Bank Yahav, whose acquisition was concluded last year, is expected to contribute to stronger Group retail operations. Yahav is undergoing accelerated growth: The retail license was enhanced, the branch network was doubled, advisory service was established and the customer base was significantly expanded. 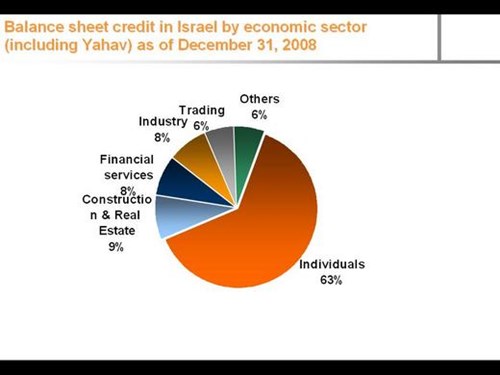 Capital adequacy for Mizrahi-Tefahot at year end was 11.31%. Since the start of 2009 we have raised NIS 725 million - which brings us significantly closer to achieving our 12% target before the end of the year.
2009 poses significant risk - but also great opportunity. I am convinced that our achievements in 2008, our outstanding managerial team at all levels, the commitment and dedication of all bank employees - would allow us to face the current challenges well and to continue on the path of growth", says Bank President, Eli Yones says President of Mizrahi-Tefahot, Mr. Eli Yones.

A few seconds and continue