Compared to NIS 252 million in the corresponding period last year

Return on equity in the second quarter: 15.4%

Net profit in the first half of this year: NIS 546 million

Compared to NIS 490 million in the corresponding period last year

Compared to NIS 715 million in the corresponding period last year

Ratio of Tier I capital to risk elements: 8.03%

Launch of new strategic plan through 2017

After being on track to achieving a target return on equity of 15%, in line with the current strategic plan, sooner than planned - last month, Mizrahi-Tefahot launched a new strategic plan for the period 2013-2017.

Growth engines in this new plan are designed to grow Bank revenues by an average annual rate of 8% or higher, while maintaining average annual growth of only 4.5% in expenses.

During the plan term, the Bank would strive to maintain its culture of operational efficiency and take additional steps to further improve its efficiency ratio to below 55% (ratio of total expenses to total revenues).

The Bank would maintain its dividend policy, subject to achieving the core capital ratio set by the Bank Board of Directors.

The risk-adjusted return on capital (RAROC) benchmark is one of the key benchmarks used by the Bank of Israel to measure performance of the banking system over the years. The 2011 review recently published by the central bank shows that Mizrahi-Tefahot has continuously recorded, over recent years, the best risk / reward performance 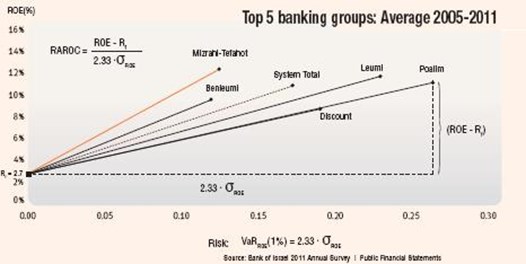 Eli Yones: Our financial statements for the second quarter of 2012 indicate continued growth and expansion at the Bank, based on current operations

"Our impressive results in the second quarter of this year, headlined by net profit amounting to NIS 295 million - over 17% growth - compared to the corresponding period last year, and 15.4% return on equity – indicate continued growth and expansion of Bank Mizrahi-Tefahot, quarter by quarter, based on current business operations.
This growth in operations is reflected, inter alia, by 11.5% growth in total assets compared to June 30, 2011 and 14.0% growth in financing revenues from current operations in the second quarter of 2012, compared to the corresponding period last year. Conversely, the Bank continued to strictly control its expenses, with operating and other expenses growing by only 3.2% over the second quarter of 2011. Consequently, the Bank's efficiency ratio reached 56.1% in the second quarter of this year.
The Bank is on track for achieving the target return on equity of the current strategic plan - 15% - even prior to the end of this plan term, which is why the Bank launched its new strategic plan ahead of schedule. Over the next five years, the Bank intends to maintain rapid growth in various operating segments, based on the same growth engines which have afforded the Bank its current achievements. Concurrently, the Bank would strive to maintain, even improve, its low risk profile and impressive efficiency ratios of recent years.
Bank Mizrahi-Tefahot continues to lead the mortgage market in Israel: in the first half of 2012, the Bank originated over 34% of housing loans (for residential purpose, including loans guaranteed by the State), while maintaining a relatively high financial margin. Bank operations in this sector are based on a conservative approach, designed to limit risk of each loan by carefully aligning the loan-to-value ratio, loan structure and components with personal borrower attributes and repayment capacity.
Retail credit: Mortgages and retail credit for households continue to account for the majority (70%) of total credit extended by the Bank, which is doubly significant in this recessionary period in the macro-economic arena and growing signs of a slow-down in business sector activity," said Bank President, Mr. Eli Yones.

Mizrahi-Tefahot Bank Ltd.
Highlights of financial statements
As of June 30, 2012 - NIS in millions

A few seconds and continue